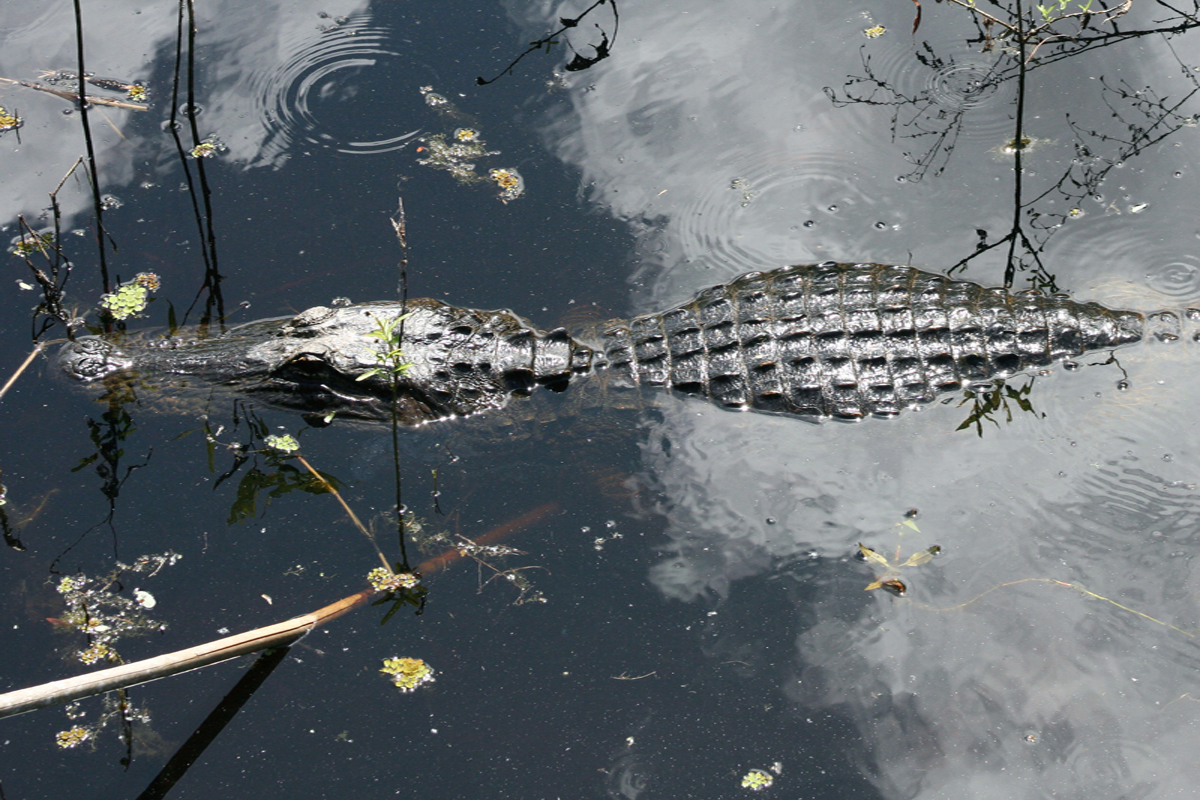 We chose Palm Coast, Florida as a winter vacation spot in part for its biking. We hadn’t biked since we were teenagers, but thought biking would be a cool pastime for old duffs to take up, provided that we could ride sidewalks mile upon mile with no hills in sight. That’s Palm Coast for you. If we had the stamina, we could do a hundred miles easy within city limits without violating that formula. It takes a lot of exploration to know that. We’ve been at it for seven years now and have not met a visitor or native who knows as many trails as we seem to know. We’re always surprising people. For toppers, Palm Coast calls these sidewalks bikeways, even though the really serious bikers— true bikers—ride the big roads, like everywhere else.

The most interesting trail for slothful bikers like ourselves is the Lehigh Trail, a converted train track running west straight as a die out of the Graham Swamp area all the way out to Belle Terre Parkway and wherever. We haven’t been to wherever yet. We park in the Graham Swamp Conservation Area lot on Colbert Lane, traveling south from the Palm Coast Parkway. The parking lot supports ‘mountain bikers’ and walkers who want to circle the swamp. I think there’s a small lake in there too. It’s all part of the St Johns River watershed. We tip our hats to these real athletes and head our bikes south down the sidewalk on Colbert Lane a couple thousand yards to the entrance to the Lehigh Trail on the right.

The major excitement of the trip is at the beginning of the trail. After a twenty yard concrete walkway that supports a nice bench and a sign with information about the trail, one enters a wooden overpass, twelve feet in width and an eighth of a mile over the swamp to the old railroad bed, where the asphalt begins. Enter the bridge, turn left around the corner, pedal four revolutions and stop! Park the bike.

Right there, looking down on the swamp to the right, you usually see a big alligator or two—a ten footer about my weight—a turtle, a Grey Heron, sometimes a snake, lots of dragon flies, and much more. It’s a virtual aquarium, and it’s really peaceful.

We are often joined by other bikers as excited about the scene as we are, and as frequent visitors. The one’s who aren’t from France or the British Isles, more than a few, are visitors or recent emigrants from the northeastern and mid-western states. The newcomers seem to like Palm Coast a lot, swear the place is not that bad in summer, and recommend checking out a neighborhood four miles up the trail called E-Section, where every street name starts with the letter E. I have a feeling there are lots of bikers in E Section.

These fellow enthusiasts always have lore to share from their experiences on the trail. One has just seen carp up by the bridge two miles away. Someone else has seen Gar. Could it be Alligator Gar? Yes, perhaps! One ex-New Jerseyite reports the frequent sighting of Boar—big and small pigs—and presumes some are on the alligators’ diets. Cougars are suspected visitors. Do you mean the Florida Panther? Well, perhaps, they could get up this way. The birds are astounding, of course, and snakes, pretty routine. Indeed, We see a snake about every fourth trip on the trail. Squirrels are ubiquitous. A woman reports a strange sign posted at a pond near Flagler Hospital: “Do not feed or molest the alligators.” Molest? One of our number decides right then to unleash a stream of water from his bottle toward the nearest alligator. No response. Maybe that’s where molestation begins.

Back on the trail, and off the wooden overpass, we’re on broad, straight, high-quality asphalt. We’re peddling on the asphalt with four-foot shoulders on each sight banking gently down three feet to swamp on both sides. The canopy provides welcome shade on some of the trip. We pass a black snake with a yellow stripe on its back. The forest is heavy over the swamp. On the right, the forest overtakes the swamp half a mile up the trail and the clearing, while dark, almost seems inviting. On the left, the bush along the trail is creased or stomped just enough to convince us that deer or other critters must use those places as paths. No, we wouldn’t want to be there at night. We pass a big hermit turtle out of his hole.

The Lehigh Trail reaches the Old King’s Road in about two miles, which when crossed, takes us under Interstate 95, the highway from Jacksonville to Miami and other points south. If you want to, you can take a left there and bike in and through ponds and parkway all the way west to State Route 100, and to the Florida Hospital, Flagler County grounds. Alternatively, one can take a right before going to the hospital and head up instead to the Epic Movie Theater and, with still another right, to the Town Center itself. The important preface here is that Palm Coast, rumored to be  the fastest growing municipality  in the country before the recession, had the foresight to convert a huge piece of woodland into the future Town Center for development when the economy gets rolling again. In the meantime, this vacant set of trails, roads, parks and bridges is a biker’s paradise.

If you refuse the digression to Town Center, you stay straight and enter the second section of the Lehigh trail, a lovely wooded trail that runs beside a canal all the way up to Belle Terre Parkway, the major highway between the Palm Coast business district and Route 100. E section is across Belle Terre to the left, and there are similar housing developments to the right. If you are patient enough to get yourself across Belle Terre Parkway using the traffic lights, the trail, we understand, continues further west beside the canal, and on to wherever, which we plan to bike to ourselves next year.

You might choose to park in the parking lot on the Southeast side of Belle Terre and access the Lehigh trail from that direction. In fact, that is the more popular entrance. There is no parking lot on the Colbert Lane entrance other than the Graham Swamp lot where we park.

Our typical trip, then, is from the Graham Swamp lot to Belle Terre Parkway, about a nine mile round trip. Our mid-trip

habit is to retire to a trail bench, of which there are many, eat some fruit, drink some water, and start back to commune with the alligators on the return voyage. We usually stage this for a late arrival back at the swamp, say about six p.m., when the light is moving lower, We’re talking late March and the month of April. I suppose we hope the alligators and turtles will start feeding. Also, The light for photography is pretty good then.

After recovering from two emergency visits to the hospital on this particular winter vacation, we have been lucky to ride the Lehigh Trail three times. We plan to go again before we leave in another ten days.

Oh, have I mentioned that the flowers are special and the

butterflies stunning?  We’ve never seen a more impressive butterfly than this dazzler. Have you? The image on the left features the underside of the butterfly in the upside-down position it most often uses to attach to the flower. The image on  the right is the same butterfly featuring the top of its wings.